The first photo I took yesterday that I loved. Probably the 12th attempt or so.

In the bathroom mirror, I tilted my head to the right, the index and middle fingers of my left hand clamping a dividing line between the tight, curly roots of my hair and the 11 or so inches of relaxed hair beyond them. I raised the scissors with my right hand, positioned the blades where my fingers were, like an ax at the foot of a tree, bit my lip, dropped both hands to my sides, scissors still clasped in the the right, and walked out of the bathroom.

I did this three times. Between each I went directly to my phone, toggling between encouraging text messages from my friend Joshunda and Google Images, where I’d searched the term “teeny weeny afro.”

It isn’t just hair. That, I knew before I impulsively decided around noon on the fourth of July to cut my own for the first time ever. Just is a sorcerer’s word; when used as an adjective, it’s meant to minimize impact. When we think someone is making too much of a thing, we say it’s “just” or “only” that thing. We say: you are making too big a deal of it. 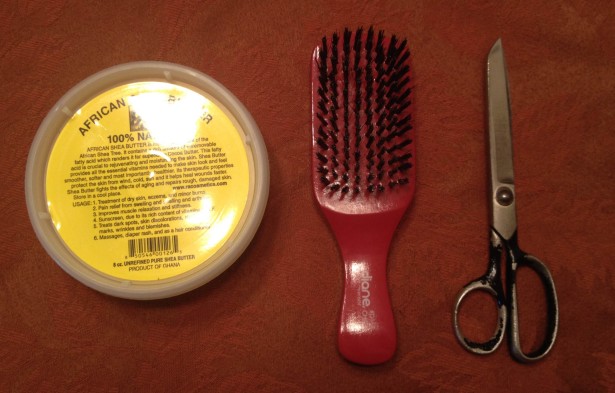 My nana has probably had those scissors for all 27 or so years she’s lived in her current residence. Maybe even earlier. We use them for pretty much everything. Even cutting 11-12 inches of hair, apparently. I bought that brush and shea butter today.

No one should be allowed to measure the import of our actions or our response to those actions (or the actions of others) but us. No one knows how great or small the significance of anything is to us, unless we are able to tell them. And when we make the oft-colossal effort to convey that significance, we need to be met with a willingness to understand or at least to respect our outlook.

Still, I’ve never been fastidious about the upkeep of mine. And I knew I wouldn’t miss it much, were I to part with it on my own terms*.

On the third try, I made the first cut. The scissors may as well have been miked; that’s how pronounced each cut’s echo was in the bathroom. Handfuls of hair fell away in neat swaths. I dropped them into a plastic grocery bag. After the fourth fall of the scissors, the fourth pulling-away-and-plopping of the permed hair into the bag, I was immune both to the sound and sight of it. It would’ve been easy to read into that immunity, to make the moment reductive. Just hair-cutting. 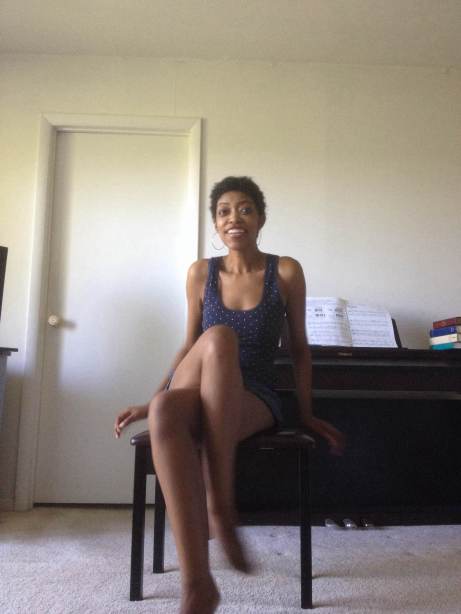 But another sensation rushed into that blank space in the hours and the night to come. To cut your own hair is to make external what is constantly occurring within. Every day we are shearing something. We are clipping away at our anger or impatience or envy. Ideally, we are trimming the parts of ourselves that feel overgrown. And we are also losing something of ourselves every day: youth, naivety, impracticality, an acute desire — nay a near-physical need — to be right. But we are not always in such precise control of that work as we can be with cutting our own hair.

It was too easy, in fact, my whole head shorn in ten minutes. I kept trimming away too-straight ends throughout the afternoon and evening, but the dramatic work — the work that, potentially, would’ve been most traumatic, if I’d hated the outcome — was the quickest.

In this way, a haircut drastic enough to warrant notice or comment, a cut that moves the line between who finds you attractive and who does not, becomes an exercise in coping with the impermanence of all things. It is a way to accelerate the most private, deeply personal work we pursue lifelong. Knowing how simple it is to part with hair — upon which nearly everyone we know projects something: desire, frustration, envy, health, liveliness, a standard by which to judge beauty — makes possible the prospect of parting with harder things. Like people. Like money. Like life. Like jobs.

I took quite a few of them. I wasn’t happy with many, but then, I rarely am. That doesn’t seem to have changed with the length and texture of my hair. Also: I keep seeing more straight ends I should probably clip….

When we aren’t thrilled with a haircut — our own or someone else’s — we use the words, “It’ll grow back” as a reassurance.

Maybe it won’t, though — at least not in the form anyone remembers it. And maybe in its protracted absence, something better grows. Like confidence. Like creativity. Like laughter. Like self-reliance. Sometimes hair is a hedge that hides us. We rarely need to remain so obscured.

I probably won’t grow this out immediately. I’ve had length; I’m not wed to it. Besides, the longer it gets, the more dependent I’ll have to be on someone whose knowledge about hair extends beyond cutting it off. I’m looking forward to learning how to care for it at this length and with this texture. I want to see what else else this haircut has to teach me.

In the meantime, I will try not to talk about it much, even if it isn’t just hair.

7 thoughts on “Why ‘Just’ is Jejune: On Cutting All But an Inch of My Hair.”