The Evolution of Self-Image.

This is what I looked like, before I had a baby:

And that was my hair: 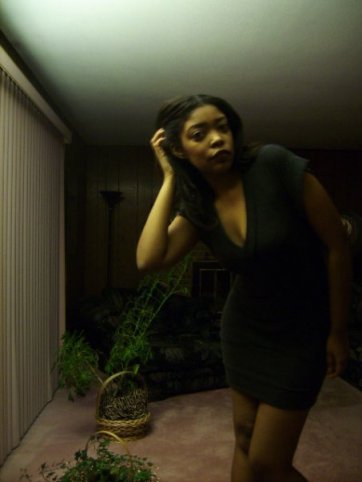 I’m gonna say this, even though I’m fully aware of how arrogant it’ll sound: God, I was pretty. (I don’t use God there as a taking-in-vain. I mean it conversationally, as in: “Why didn’t You tell me?” In retrospect, God did tell me. He gave me friends, and He gave me family–and a lot of them tried to inform me that I was beautiful. It is my own fault that I didn’t believe them.)

I’ve said here before that I started taking pictures of myself in grad school. I got my first digital camera as a birthday gift, during my second year there. Fortunately, that was the year I had a room of my own, with a door I could close and even lock, as opposed to the dragging overlong curtain I had to hang with a suspension rod over the open-space cubby hole I lived in my first year.

There is nothing like privacy, when the time comes to confront your attitudes about yourself. I always suspected that I wasn’t who I believed I was, that I was better. But in what ways? I started taking the pictures, in part to test this theory. How would I have to project myself, in order to begin to see myself differently? And what, exactly, did I want to project? How much did the way I viewed myself differ from the way I was viewed by others? How much should I care about how others viewed me?

After classes, I’d close that bedroom door and I’d get either literally or figuratively naked. I’d give myself to the shutter, letting it capture whatever it would: a dark and splotchy blemish, a pucker of cellulite, the baby tooth that never fell out or the extra, 33rd tooth rooted a quarter-inch above the rest of my gum line. Bushy eyebrows, underarms two days short of a shave, thunder thighs, and all.

Eventually, I began to understand myself. I’d look at a batch of 80 self-portraits and find maybe five at a time that I was happy with. Then, I’d stare at the five and evaluate what I favored about myself. I enjoyed the length of my limbs, how the bend of an arm at a certain angle made me look contemplative or how the seemingly offhanded extension of a leg in a certain direction made me appear fanciful and carefree. I got that my teeth appeared straighter when I smiled with my leftmost face. And my eyes were, in fact, capable of more than a deer-in-headlights ogle.

I could be open or mysterious, earnest or duplicitous, seductive or chaste, intellectual or downright primitive. All it required was forethought and action.

It was around then that I began to invest more in my daily appearance, I suppose. For one, I was becoming a teacher of teenagers and few groups are more thorough assessors of looks than people who are fresh out of high school. But apart from my desire to appear competent to them, as a new professor, I wanted my outer appearance to reflect my gradually improving opinion of myself.

In order to understand what a feat this was, you’d have to know how impassive I was before. When my hair was long and I rarely had to think about it, I never styled it. For years, I didn’t even roll it at night or comb it every day. I let it hang limp and curled it only when I was heading someplace where I imagined my appearance would be scrutinized. Even when I learned to care for my hair–to roll it at night and to wrap it in satin to protect against dry cotton pillowcases or to cover it when I was out in the rain–I continued to take it for granted. It had always been there, and I figured it always would be, unless I chose otherwise.

And then there was body image. I thought I was fat. Not always, but sometimes. I knew I weighed about twenty pounds more than the ideal for my height. But I looked like ^that^. So some days, I felt thin and svelte and healthy. Other times, I felt lumpy and hippy and plump. I rarely ate healthfully. One big unhealthy meal, followed by hours of air. Or several small floury snacks and no real meals at all. I even followed that pattern, pregnant, some of the time.

It is perhaps because of my sketchy nutritional practices (in addition to the “partner-less pregnancy” stress) that my hair started falling out in handfuls three months after I gave birth. I was afraid to comb it, it was so delicate. Even though I Googled it and found several sites reassuring me that no matter how much hair I lost, I wouldn’t lose it all, I remained unconvinced.

Meanwhile, if I occasionally thought I was fat before, when my stomach was taut and my hip bones were visible, I was certain of it, post-partum. So much for even pretending through standing at just the right angle to have a flat stomach. The looseness of the skin that’d just stretched to its limits in order to house my baby was unmistakably hanging over jeans and protruding under shirts and dresses.

For a while, the work I’d done on improving the way that I felt about myself seemed to be unraveling.

I was back to inaction and believing that whatever attractiveness I’d cultivated before had been forfeited through the doughy business of passing a person through my body.

Then, my hair was translucent. What once was a thick curtain of dark tresses was now a stringy set of sheers. Once I got over the shock of seeing handfuls of hair in my hands, I marched into the Douglas J Aveda cosmetology school five minutes from my apartment and I got it cut:

I knew when I saw the pictures I’d taken that day that I was no longer the person I’d grown comfortable with. My body had begun to reflect the inner transformation motherhood necessitates.

In short: I wasn’t… pretty anymore. No matter how I twisted myself to pose, the skin under my eyes formed crescents of sleeplessness and the curves I’d grown to love weren’t anywhere near where I thought I’d left them.

But it didn’t matter anymore. While my appearance is still important, I’m really too consumed with being a less self-conscious person—that is to say: too busy actually becoming what I only pretended to be in pictures, before—to obsess over prettiness lost.

And that, friends, was the goal all along. So I gotta tell you: now?

Now, I feel quite beautiful:

Oh, I still take the pictures. But not for the same compulsive self-assessment purposes. Now, it’s just… fun. Imagine that. Before, self-image was a minefield to tiptoe through. Now it’s a hopscotch board. Or, you know. Twister.

11 responses to “The Evolution of Self-Image.”