In the past ten days, I’ve started three different potential blog posts, but I’ve been overcome with ennui somewhere between the opening paragraph and the halfway point of each. If I’m bored with the work, I know that you’ll be twice as bored. So I’m not going to publish any of that.

Since my last entry here, I’ve been published at RollingStone.com twice, once about Bill Cosby and more recently about Black Twitter (I spoke about the latter — among other things — on L.A.’s KCRW Press Play on Friday).

I’ve also written more weekly contributions for The Washington Post’s Act Four, about my friend Daniel’s fantastic young adult novel, Shadowshaper (and about the state of YA lit for black and brown kids generally), about “The Astronaut Wives Club” and its dogged insistence on Disneyesque racial commentary, despite being set in the early 1960s; and most recently on the news that the Obamas’ first date is being made into a Before Sunrise/Medicine for Melancholy-type romantic dramedy.

Last weekend, I spent two days in D.C. at Women’s Media Center, where I was part of Progressive Women’s Voices Class of 2015.

When I couldn’t find anyone to watch my daughter for 10 hours per day (eight in training and two in round-trip Baltimore-DC driving commute), the Center kindly provided two amazing caregivers for my daughter. The first day, she timidly crept up to me as I sat in U formation at a table, trying to focus on the work ahead. I scooped her into my lap and rested my chin in the downy crown of her head. I felt so empowered in that moment, so supported. It was one of few moments in my parenting life when I felt like Having It All might not be the myth we’re convinced it is, that if work and life can never be quite balanced, they might at least have sweet, small clearings like this one at some of their intersections.

I breathed in the scent of my daughter’s hair, an admixture of cremes and jojoba, proud of myself for my tentative strides toward caring for it myself, ever since my mother — who’d lived with us since I gave birth and who, aside from being my first-string childcare back-up, was also my kid’s only hope for fashionable, healthy hairstyles — had moved away a month before.

My first-ever attempt at a milkmaid braid (or twist, as it were). I was so proud that I took pictures! Next up: learning to cornrow. … Maybe.

I was starting to get the hang of this, I thought. Finally. A full five years in. I’d worried that, with one less person to fall back on, the plates I’d already been struggling to spin would definitely topple. But here I was, managing a rigorous training program, surrounded by wildly accomplished women — chiefs of staff, directors of government agencies, nonprofit founders, news analysts, people who’d confidently testified before Congress, all of them the kinds of change agents I hope my own child will grow up to become. And here she was in my lap, being so serene and well-behaved. Here we were — miraculously — making it.

Then she lifted her head from my chest, and for a second, her face clouded. So did mine. “Are you o—?” I started and she answered by vomiting. Oatmeal, an orange wedge, a single bite of a chocolate muffin. There it all was in my lap.

So much for uncomplicated triumphs. Motherhood is a sustained effort at maintaining professional competence while struggling to mask the faint waft of toddler vomit lingering in the fabric of your smart little rayon-blend, business-professional romper. It’s practicing how to sound like an “expert” in an interview while rushing into the lobby between takes to rub your kid’s belly, make empathetic cooing noises, and apologize in advance to the sitter for any repeat-hurling performances (Mercifully, there were none). Because my attention was so divided, I didn’t entirely understand the assignment we were supposed to complete toward the end of Saturday’s session.

I ended the day flustered and deeply unsure of what I was even doing there. Had I experienced something like that at a training session before becoming a mother, I certainly would’ve excused myself from the table to cry. I was close this time.

But the thing that forced the tears back into their ducts was that I knew how hard I’d fought even to get to the building that morning. To load my child up and drive her here, to find our way out of a poorly designed underground parking garage without freaking out, to recover my calmness after getting lost in D.C. as I so often do, to keep telling myself that my acceptance to this program wasn’t a fluke and that someone more deserving without so many self-perceived obstacles should not, in fact, be here instead of me. Those things were as difficult as managing the heartstring-tugs of a nauseous child and the eight hours of new material that needed to be synthesized and practiced immediately. But I’d done them. Here we were. I’d do this, too. 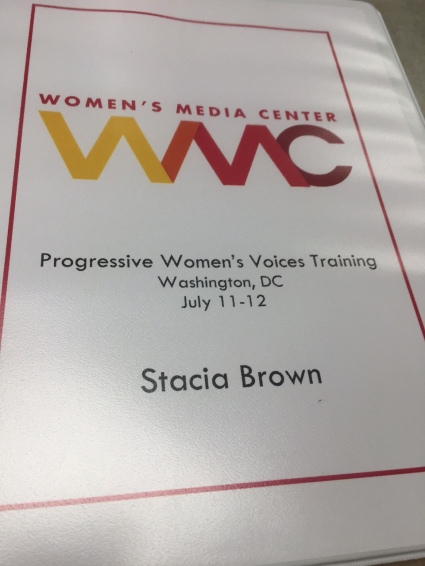 By Sunday, I knew that no matter how I performed in the day’s exercises, the training had already given me invaluable experience in managing my life. It helped me refocus on Beyond Baby Mamas, an undertaking I’d ironically convinced myself I was too busy simply trying to survive as a mom to devote the necessary attention to. It taught me not to be afraid to articulate my needs as a parent entering a professional space and, more importantly, to seek out spaces that are welcoming of and accommodating to me as a parent. Those spaces do exist and, when possible, I am entitled to enter them. Where they don’t yet exist, I now have a precedent for what such spaces should look and feel like. And above all, attending PWV media training boosted my confidence in my ability to juggle the unexpected with the anticipated, with my daughter in tow.

I’ve had few greater moments as a mother than the one I felt last weekend, when it became clear that my daughter understood what I was doing at Women’s Media Center as work — that even at almost-five-years-old, she is capable of comprehending that our world’s responsibilities are broader than the work we do at her school and in our apartment. As a (mostly) work-from-home mom, that felt momentous.

She was thrilled to return to the offices on Sunday. “Are we going back to work?” she asked and I knew then that she’d approached the weekend with her own sense of duty and viewed it with her own sort of seriousness.

Her voice and, often, her laughter filled the corridor outside the conference room, and some of the deeply gracious women there were calling her “Dr. Story” because she was wearing and wielding her Melissa and Doug lab coat and check-up tools. It should be said that, no fewer than ten times over the course of those two days, trainers and trainees asked after her recovery from the upset-tummy episode, and/or offered their own commiserating, encouraging anecdotes about their own kids’ projectile vomit.

One thought on “Life with a Five-Year-Old Coworker.”