This is what I remember: a white house. Three levels, two bedrooms on the third floor where I was too afraid to sleep alone, your room on the first, where you let me sleep on a living room loveseat, twenty feet away from your door. Wallpaper. Yours was among the only houses I knew that had it. I grew up in brick buildings where family homes were referred to as “units” and leases dictated we keep the walls bare. One of your wallpaper patterns was pink. Maybe one had some green. The sun filled your kitchen. The some of the walls there were white. You had lots of cabinets and each one was full: more than one pattern of china, more sets than you’d ever need for one family gathering. Many dry goods.

Sometimes you had your milk delivered. In the ‘80s. (This is something I have to convince myself I didn’t imagine: the continued existence of professional milkmen in your neighborhood when I was little. But I am pretty sure it was true. I remember the bottles.)

A landing just off the kitchen led either down to the unfinished basement or into the lovely backyard. You gardened. I remember cornflowers. But I don’t know if they were in the grass or on the china or on the walls. You liked blue. I think of you often when I see gradients of blue. We sat in the yard and we counted the birds: cardinals and blue jays excited me most. But you knew more species by name than I would ever learn. We lured them with feeders and baths. We laughed as they pecked and preened and splashed. You were Mother Nature, as far as I was concerned. None of the black women in my life were more natural than you. But on many an occasion, my ears were scalded by the hot comb in your kitchen. I do not think you believed that a woman’s hair should look as wild or as free as her soul.

You let me plant watermelon seeds in the soil. I was never around to see the harvest; I had long returned to Baltimore for the school year by then. You were kind enough not to tell me what came of my little crop experiments. I’m guessing nothing.

Yours was the only home where I’ve ever hung laundry outdoors and waited for the wind to catch it, quicken it, ready it for folding. I remember the wooden clothespins, how I pretended they were people, peasants bowing to the queen standing with the laundry basket under the line.

The basement was unfinished. It had a sink where you washed my hair — a task neither of us relished — and a ping-pong table where you bested us all, match after match, like we weren’t your darling grandchildren, like you weren’t five or six decades older, like you were on a competition circuit. You laughed when you won. And you had the best winner’s laugh, low and crackling with an ageless mischief. It was the clearest indication I had that you had been raised the lone girl among older brothers. 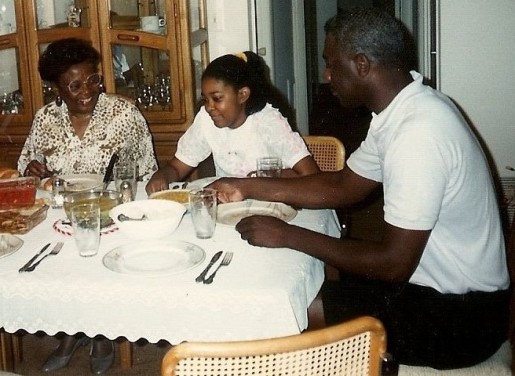 Until I was nearly four, I slept with you during my visits. I do not remember much, except what one never forgets about sharing a bed with her grandmother. Ideally, it is the safest place we can know, safer, in fact, than the beds of our parents, if for no other reason than that our grandparents once shared their beds with the children who would become our parents. They have shepherded a full generation before us to the harbor of adulthood. We’ve no reason to doubt they will guard us till we get there.

We were only able to share a bed because the other half of yours was newly empty. My grandfather died one month after I was born. You had been married for over forty years and then your nest, long emptied of your four grown children, was entirely empty. There was only you. When I was born, I lived two hours away from you, in Lansing. You liked having me as company, though now that I have mothered an infant myself, I imagine it was the busy work you welcomed: the bathing and diapering, the feeding and bouncing to sleep. You kept me often in those first years. And when I was three, you remarried. Caring for a child is no substitute for the care exchanged in a marriage. You knew what you needed.

You and your new husband took us grandchildren to the fairgrounds. My favorite parts were the three-legged dogs and the flavored lip balm you’d buy me at the Avon tables: cola, cotton candy, mint chocolate chip. These were perks that eased the transition.

I will skip ahead, but I remember more: you sang hymns in soprano. The one wound tightest ‘round my memory of you is the Solid Rock* hymn. You sang it with a such sweet, earnest conviction that I can’t sing it myself without crying. I don’t sing it much anymore. And you taught me scriptures, all from the Pauline epistles. You believed in a different doctrine than the one I was learning at home, but our bibles were the same. The scriptures I link most closely to you is Ephesians 2:8-9: For by grace are ye saved through faith; and that not of yourselves: [it is] the gift of God:not of works, lest any man should boast.

You could’ve opened a charm school. You were definitely mine. I learned elocution, how to cross my legs at the knee and fold my hands over them. But you enjoyed fishing and RV-ing and pugilism. Sometimes I think city girls are the last to truly comprehend just how many multitudes women can contain, how widely the definitions of “modern” and “traditional” vary. I understood it early, but only because of you. You believed women should be woodsy and refined in equal measure. I’m not sure if you’d approve of where I settled on those scales.

You drove a gray Cadillac. Fast. There were other cars. This is the one I recall.

One of your brothers was named Bill. Uncle Bill had some form of dementia. I think it was Alzheimer’s. Not long after his arrival, I stopped spending the night at your house. There were many reasons — and I wasn’t sure about any of them at the time — but perhaps one of the most significant was that, if possible, when you are caring for someone with Alzheimer’s, it is important to keep the household residents he no longer recognizes to a minimum. It is simpler for everyone.

You cared for Uncle Bill until the day he died.

I don’t think much about the eight years you spent living with diagnosed Alzheimer’s. I visited you a handful of times while you lived at Seminole Shores, but with the exception of the first visit, these were moments long after you would’ve known who I was.

The family filled your room with photographs. You in much earlier times. You with all of us. You with your late husband and your living one. Every time I visited, there were greeting cards from whatever the last occasions may’ve been: Mother’s Day; your birthday; thinking of you. The staff dressed you mostly in sweat suits, because they were easier to don and to remove. You would not have found them flattering. But my aunts brought in a hairdresser to shampoo and style your hair each week and it was long and full and lovely for a while. In this, you would have reveled.

I do not think of you much during this time, because I have too few hooks on which to hang the limited memories. The room itself, aside from the mementos, was a unit, one in a hall of others just like it, visited by (thankfully) kind workers and the occasional wandering resident. But it is a not a part of your life I can connect to the rest.

There was no clothesline at Seminole Shores.

Last week, I watched a news segment on model and restaurateur B. Smith, whose early Alzheimer’s has fractured her life in premature and terrifying ways. (The excerpt above is a truncated version, edited by a full four minutes. The fuller, more honest transcript is here.) Her husband, Dan Gasby, is her caretaker. He reminds me very much of your son-in-laws; they too are steady and unwavering, but I would imagine that under Gasby circumstance, they would also feel very much out of their depth in suddenly having to care for a woman whose vibrancy and independence and ambition seemed to have been the very beacons guiding the course of their lives. Before she began to lash out at him and to ignore pointed questions, before she confessed to him what the doctors had told her about her condition, he and B. were business partners: she the visionary and public face, he the bulwark behind the scenes.

When I tell you that the segment staggered me, I am understating it. This woman, whose DC restaurant I visited often before it was shuttered, whose face I saw smiling up at me from packages of Betty Crocker cornbread mix for years, whose lifestyle series I’d watched on TV, struggled to answer questions about the date or found herself suddenly stifling a sob, and it disconcerted me in ways I couldn’t have anticipated.

I am heartbroken for her, irrevocably altered as her life has been and will be. And I marvel at her courage and candor, in willingly offering her story to the rest of us, as a call to reconsider how we think of Alzheimer’s and dementia. They are not diseases that only ravage the very old and the rapidly aging. And they are not illnesses from which we should avert our eyes. Loss of dignity isn’t in the involuntarily forgetting; it is in being discarded because of it.

I wish I had been more attentive. I would have more memory to write in the After and far less speculation. You had been gone for a long, long while in every sense but the bodily one. But I often wonder when the last of your memories retreated down whatever corridor where the rest of them were being held ransom. What were you able to hold onto longest?

I am fine not knowing. Consider that another mystery of our faith. 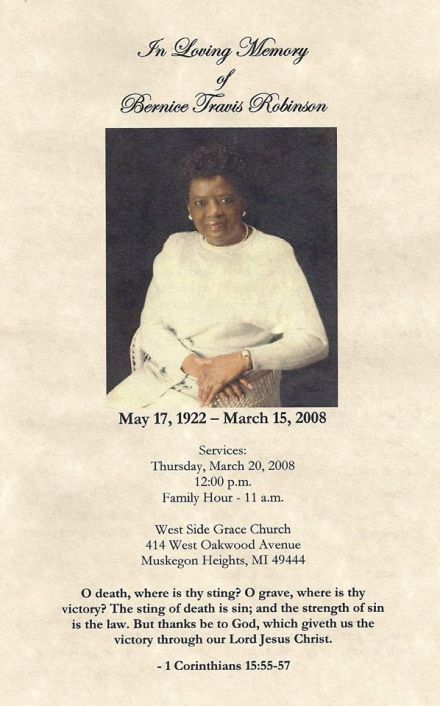 Here is what I know: you were deeply loved. You were frequently visited. And on the day that you died, I was there. You caregiver called in the morning. It was Saturday. We were speeding the 30-highway-minutes toward Seminole Shores when she called again to say that you were gone.

You looked like you were resting. We sat with your body for hours, waiting for the coroner. My father walked to the lake on the grounds and stared at it alone for a long while. All your children and some of your grandchildren arrived before you were taken to the mortician. We were alert and reverent, as you would’ve been, had it been any of us. The rest arrived later that night or by morning. We leaned on each other and spoke happily, vividly, accurately of you.

We still do. We have your letters, your photographs, an extensive chart of genealogy and most importantly, we have very different memories, distinct recollections and experiences of you. When we place them all together, when we shuffle and tilt and patch them, you reappear.

We still chase down that corridor, unearthing the many reams of your life that felt so irretrievable. We reclaim and recover you.

*You would not have loved this rendition of this hymn. Of that, I’m sure.

slb is a writer and professor in Baltimore, MD. View All Posts

4 thoughts on “How We Reclaim What Alzheimer’s Robs.”