When a (Comparatively) Carefree Blackgirl Wins An Oscar.

This is a story of an elegance carefully cultivated. This is no sudden ascendancy to delicate silks and bold brocades, no tale of a girl plucked from obscurity or hardship, conferred the brass ring of Tinseltown by princely powers-that-be. It is, instead, a story of privilege, of justice. It is what happens when a Kenyan senator entrusts his daughter’s post-secondary education to The Yale School of Drama, rather than insisting she study medicine or law or finance. And these — the highest accolades in the field — are what’s expected when such a daughter is daring enough to pursue a life in pictures, within a family of professors, physicians, and politicians.

This is not a reality as well known to American black girls with silver screen ambitions. We watch our stateside actresses languish in Hollywood for decades, delivering pounds of flesh just for bit parts: girlfriends in black films and girlfriends in white films and staid, put-upon wives in comedies, action films, biopics. And yes, even now, the occasional brave domestic, even now, the harrowingly tortured slave. We see them shed their apple-cheeked innocence all too quickly, becoming more vocal and more cynical about the dearth of complex and meaty work for them to do as they age.

Our ingenues rarely win Oscars. It is our seasoned comediennes, sassing their way through lines like, “Molly, you in danger, girl!” or throwing frying pans at their pregnant daughters, who take home the gold. It is the reality star who belts a gut-wrenching beggarly torch song to a man already walking away or the naked grieving mother sexing the guard who executed her husband, the round, battered, quick-witted maid who bakes her own excrement into pies. They are the ones who win. And we are proud of their achievements. We take everything we get, and we are glad for, if critical of, it.

We know how hard those actresses had to work to get it, know how many low-budget straight-to-DVD flicks they made to keep themselves visible, how many blond wigs and gold teeth and fishnets they had to don and exactly how much of their bodies they had to bare — just for the opportunity to be seen. We suffered through Whoopi encouraging her ex to appear in blackface. We accept not just the existence, but the five-year run of The Parkers. And we swallow the painful realization that though many a role easily procured by a Paltrow, a Portman, or a Witherspoon could be played, if not better, certainly just as well, by an actress of color, the film would not likely be attended by as large an audience.

Because this our sisters’ lot in all of the American workforce. We are offered little, we earn less, we hustle harder and stress more — all in response to the idea that our appearance and ideas and work are not as marketable as a white colleague’s would be. Why should Hollywood be different? 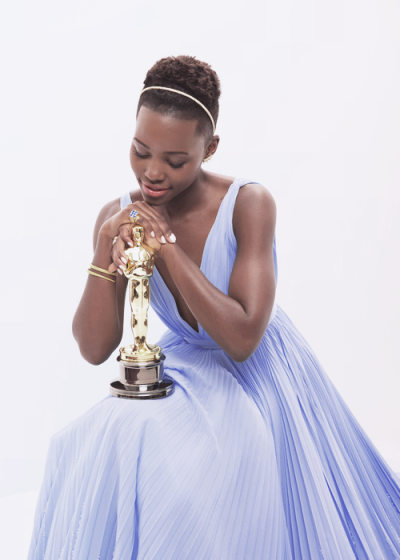 We are gathering our awe and placing it like so much frankincense and myrrh at the feet of Lupita in direct response to this resignation. This awards season she has become the boilerplate of every blackgirl dream deferred, and it is understandable. Her skin, a brown so rich and deep it seems to welcome the seeding of our hopes and the promise of harvest, is politicized (and romanticized) because such things are inevitable in any country where skin color can ignite or exempt citizens of resentment or responsibility. Nyong’o herself speaks to the significance of women who look like her ascending in high-visibility markets. She cites Alek Wek and any number of American black actresses as her own self-image inspirations. And she is similarly self-aware of what it means to be a literal projection of an audience’s desires, history, and needs.

But the story of Nyong’o’s near-instant entree to the A-list is uniquely her own. She stars in an elegant, brutal British film about American slavery, deeply connecting with part of the diasporic experience that is foreign to her family in ways it is not to the American black’s. And she graciously accepts a well-deserved Oscar for that portrayal without having to carry the full weight of the awards’ contentious racial history.

If she hears any naysaying speculation, any claims that she “only” got the Oscar for playing a slave or that the win isn’t one the black community can fully claim because she “isn’t ‘black’ enough,” the criticism will not dampen the moment, will not force her to interrogate her joy to the degree that it would for an American black actress.

She is not saddled with centuries of diminishing returns. Accordingly, Lupita is a carefree black girl par excellence — and we have yet to see what the career of a black actress this successful with just one feature-length role under her belt, and this comparatively unburdened by Hollywood’s racist legacy, looks like. (Consider other recent black American actress nominees with one role their belts — Quevenzhane Wallis and Gabourey Sidibe — and how their reception in Hollywood and media compares to Lupita Nyong’o’s. Neither swanned through her awards season unscathed by racist, appearance-policing coverage — and Sidibe is still the subject of think pieces that actually use their headlines to implore that the public treat her with more respect.)

It is this lack of similar encumbrance — perhaps above all else — that excites me so about Nyong’o. We have yet to see what happens when a privileged black woman begins her acting career with Ivy League theatre pedigree, unchallenged fashion icon status, and an Oscar for her very first role.

It would be easiest to succumb to the skepticism I’ve been keeping at bay. I know America; it’s my homeland. It is not Nyong’o’s. I’d imagine — and I could well be wrong — that she is coming into Hollywood with the un-self-conscious approach to race that Chimamanda Ngozi Adichie’s Americanah heroine Ifemelu (and indeed, Adichie herself) have brought with them to this country.  Adichie was famously quoted last year as saying that American blackness did not initially occur to or appeal to her:

In Nigeria I didn’t think of myself as black. I didn’t need to. And I still don’t when I’m in Nigeria. Race doesn’t occur to me. Many other things occur to me. But in the United States, yes…. Also, race is something that one has to learn. I had to learn what it meant to be black…. If you’re coming from Nigeria, you have no idea what’s going on. When I came to the United States, I hadn’t stayed very long, but I already knew that to be “black” was not a good thing in America, and so I didn’t want to be “black.”

While I don’t get the impression that Nyong’o, having spent the last two years of her life immersing herself in study and portrayal of the American slave experience, would hold the same perception of American blackness as Adichie initially did, it is safe to say she can still hold herself aloft from it. For her, blackness, in a context of white American oppression, is a role. It is not intrinsic to her identity. She will play plenty of other roles, but she will not feel “relegated” to stereotypical portrayals in quite the way that American black actresses do.

I already know what Hollywood will try to make her. I know the gradations of blackness they will implore her to learn. But I do not know how she will resist. I do not know what she herself will teach. But she is entering the field with just enough privilege and confidence to inspire my hope that she will do just that: instruct rather than simply accept — and learn from black actresses (rather than white directors) how best to navigate this space.

Watch with me. And just you wait.

59 responses to “When a (Comparatively) Carefree Blackgirl Wins An Oscar.”