As Christmas nears, I am remembering not the miracle of the virgin birth, nor the pageantry of an angelic announcement. Not the damp stench of dung in the manger, nor the frankincense and myrrh that staved that stench from the newborn Christ’s skin. Days before the holiday, I am remembering Herod the Great.

He has come to the fore of my Christmas contemplation, because we have too often overlooked his part of the narrative. This is a time to revere a messiah, but it is also a moment to mourn the massacre that followed his arrival.

This year, cruelty has been charging forth, unpenned, throughout cities across the nation. As our annual gift-shopping frenzy ensues, protesters are pretending to be dead in the halls of commerce; they are splaying themselves on unyielding concrete, channeling ill-fated ends. Children are raising “Am I next?” signs over their heads when black citizens die unjustly at the hands of police. And now, unions of officers may be seeking street retribution for the killing of two of their own. Now, they are declaring war on communities they once swore to serve and protect. Now, they are equating the shooting of unarmed children with the possibility of death in the line of duty, as though the latter is not a known and accepted hazard of their chosen profession.

It is fitting, then, to recall the cruelty of King Herod during this holiday season, as carols seem inadequate and shopping is more an act meant to numb than to heal. This year, the wintry air, which often feels more fit to breathe when it’s this icy and crisp, is oppressive instead, as we chant reminders that breath, for some, is no longer regarded as a unilateral right but a luxury.

I am thinking of what happened after word reached King Herod that a new heir had been born, one without earthly father or the scourge of human sin. I am thinking of the soldiers the king sent forth wielding swords, all the mothers whose sons were ripped from their arms as they cooed, boy-children beheaded before their eyes. This is a message. This is a message. This is the message: There will be no savior. Your plea for mercy will go unheard. The lives of your children do not matter. 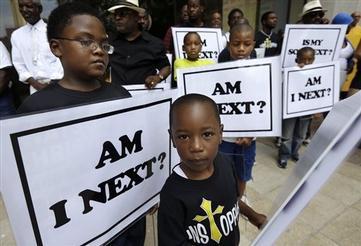 Herod meant only to protect the institutions he’d raised. He wanted to preserve his own rule. If it meant the bloodshed of every child with the potential to grow up and challenge his authority, he reasoned, it was a small price to pay to keep his peace.

And there were, in fact, serene years. Years their son Jesus spent in prayer and in study at temples, years of learning a meaningful trade, years of wedding feasts and thousands of unthreatened births.

These are the years on which we meditate when Christmastime is nigh. But there has always been a pall cast over my heart as I regard the infant in his swaddling clothes; for Easter will also come, and with it, the annual reminder that our Christ was kept safe for over 30 years just to die at the hands of a government as treacherous as Herod the Great’s.

When we celebrate the promise of salvation rushing forth into the world, we do it with full understanding that salvation is not an unbloody enterprise.

This is the time of year when we commemorate the emergence of promise in a desolate time, hope in an hour of intense oppression, faith that must be guarded amid palpable terror. At no other moment in recent memory has this nuanced facet of our celebration been as relevant as now.

The symbol of our belief knew well this tension, this peril. He knew what it was to have parents who feared for his safety whenever he left home, who warned him of how best to interact with authority in order to preserve his life. Of course, our Lord was not here for self-preservation. He came not to bring peace, but a snare. He came to die.

This Christmas, we must remind one another that the emergence of a savior is not the end of the story. It is the beginning of terror for the mothers of countless firstborn sons. It marks an era of martyrdom, both witting and unwitting.

But it is also when we ask the most essential questions. Why do we continue to believe? How do we continue? I cannot speak for anyone else, and even my own answers vary year upon year. Today, I believe because there are far more people patterning themselves after Herod than after Jesus. There is far more tangible evidence of terror than of salvation. And this is all the more reason for me to hold fast to the hope that I am not here alone. I am not fleeing to a land that does not exist. I am not praying for the safety of a black child whose ill fate is already sealed. There is still the hosanna to sing. There is still breath to declare a glory as yet unseen. There is still someone waiting in the celestial wings, with knowledge of a world yet to come. I believe because this — the deaths of Tamir and of Eric and of Dontre, the deaths of Rekia and Tanesha, of Ramos and Liu — is not the first massacre of innocents. It will not be the last. And still, each year: tidings of great joy.

“For unto us a child is born, unto us a son is given: and the government shall be upon his shoulder: and his name shall be called Wonderful, Counseller, The mighty God, The everlasting Father, The Prince of Peace. Of the increase of his government and peace there shall be no end.”

I believe because these words, recited, return to us each December, even as so many of those we love do not. I believe because there is comfort in their recitation, in the tradition of their endurance. Something else is coming, something that succeeds us all. For a moment, this stills my trembling. For a day, I welcome all that we will never understand.